Edward Bekker lead his first course in 1980 with the former Royal Dutch Alpine Association. After an intense four-year training programme, he received the German diploma ‘Staatlich geprüfter Berg- und Skiführer’ in 1987. He was the first Dutch mountain guide to be a member of UIAGM/IVBV. In 1987 he also started Edward Bekker Ski & Alpinisme. Since then he has been organizing and leading trips almost daily along with a team of guides and, not to forget, office staff. 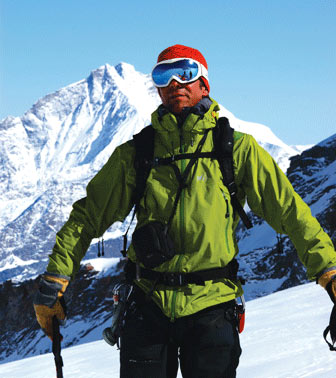 Since 2020 is is also Level 2 certified mountainbike guide at Swiss Cycling and the German DIMB.

As an alpinist and mountain guide, he has participated in successful expeditions, which include the following peaks:

The International UIAA Expedition Commission, to which he belonged as representative for the Dutch climbing and mountain sports association NKBV, has invited him twice to lead expeditions for talented young climbers. These expeditions, to China and Pakistan, were very successful and a few new interesting and sometimes difficult climbing routes were opened.

Always looking for new and challenging ski areas, in the past few years Edward has specialized in off piste safaris and tour skiing in the Alps, Morocco, Canada, Chile and the Arctic, especially Norway, Sweden, Iceland and Spitsbergen. He also works as heliski guide at partners Arctic Heliskiing in Iceland, Turkey Heliski and Heliski guides Sweden.